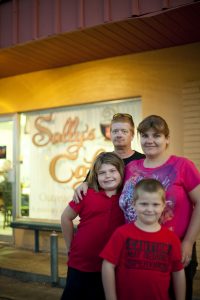 olis, IN– September 18, 2013 – The recession has meant that high numbers of all types of households have been struggling to purchase adequate food, but households with children suffered extraordinarily high rates, according to a new national report released today. In surveys running for five years through 2012, nearly one in four households with children said they couldn’t consistently afford food, even as the House Majority Leadership is proposing to cut the Supplemental Nutrition Assistance Program (SNAP, formerly food stamps) by a staggering $40 billion.

Food Hardship 2008-2012: Geography and Household Structure, released by the Food Research and Action Center (FRAC), found that in surveys from 2008-2012, 26.5 percent of households with children in Indiana said there were times in the prior year when they did not have enough money to buy food that they needed for themselves or their family.  17 percent of households without children Indiana said they faced the same struggle.  Indiana is ranked 16th worst in the nation in both categories.

“Given the economic struggles that continue to persist in Indiana, we urge our Hoosier delegation in Congress to reject cuts to SNAP,” said Emily Weikert Bryant, executive director of Feeding Indiana’s Hungry.   “Food hardship is far too high for all households in Indiana, and the situation for households with children is far worse. Our Members of Congress need to act on what’s going to help, not hurt struggling families here, and the first step is to pass a Farm Bill that doesn’t cut SNAP.”

This report is consistent with data released by the federal government this month which show how many Americans continue to struggle. Food insecurity data, released by the Economic Research Service of the U.S. Department of Agriculture (USDA), show that 13.5 of households in Indiana struggled with hunger during the 2010 to 2012 period. (Those data are not broken down by households with and without children.) And poverty data released yesterday by the U.S. Census Bureau showed Indiana’s incomes trailed the U.S. average in 2012 by 9 percent, the 12th year in a row Hoosiers’ earnings have lagged behind the average Americans’.

“What these data tell us is that there’s a new reality for too many Hoosiers. Hunger and poverty rates spiked at the beginning of the recession and have stayed high ever since,” said Bryant.  “And the food hardship data reveal the extraordinary frequency of that struggle for households with children who say they can’t afford enough food. Cutting SNAP would worsen an already terrible situation.”

The FRAC analysis examines food hardship rates – the inability to afford enough food – for households with and without children. Data are available for the nation, every state and region, and 100 of the country’s largest Metropolitan Statistical Areas (MSAs), including Indianapolis-Carmel, and the Louisville, Cincinnati, and Chicago MSAs which contain portions of Indiana. Findings for childhood food hardship for surveys from 2008-2012 in these MSAs include:

The full analysis is available on FRAC’s website (www.frac.org).

FRAC’s Food Hardship in America series analyzes data that were collected by Gallup and provided to FRAC. The data were gathered as part of the Gallup-Healthways Well-Being Index project, which has interviewed nearly 1.8 million households between 2008 and 2012. FRAC has analyzed responses to the question: “Have there been times in the past twelve months when you did not have enough money to buy food that you or your family needed?”