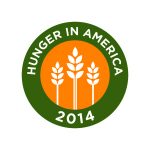 A new study by Feeding Indiana’s Hungry and Feeding America shows that 1 in 6 people, or an estimated 1.1 million people, in Indiana turn to food pantries and meal service programs to feed themselves and their families.  Of the households served by Indiana’s food banks and programs, 43 percent include a child under 18 and 25 percent contain a senior aged 60 or over.

The study documents household demographics and offers a snapshot of the people served by food banks in Indiana – their circumstances, the challenges they face and the choices they are forced to make living on extremely limited household incomes. It is also the first nationally-representative study that assesses the prevalence of past and current members of the U.S. Military* and adult students receiving charitable food assistance.

“The results of this study show us that the face of hunger is one we would recognize in every Hoosier community,” said Emily Weikert Bryant, Executive Director of Feeding Indiana’s Hungry. “Many of our neighbors who are seeking food assistance have jobs, raise families, work toward education and struggle with health problems, like all of us. Too often, our clients also have to make difficult decisions to get enough food for their families. Knowing that hunger is something no Hoosier should face, it is important to remember the critical work food banks do every day, and how much more we can do together to solve hunger across Indiana.”

“The Hunger in America 2014 findings demonstrate the urgent need for all of us to address hunger in our communities,” said Bob Aiken, CEO of Feeding America. “This data provides a factual basis for decisions about how we as a nation approach hunger relief and protect our most vulnerable citizens.”

Key statistics from the report include:

WIDESPREAD USE OF FOOD ASSISTANCE

Following are the choices client households reported making in the past 12 months:

60 percent of households reported using three or more coping strategies for getting enough food in the past 12 months. The frequency of these strategies among all households include:

Hunger in America 2014 was conducted using rigorous academic research standards and was peer reviewed by a technical advisory team including researchers from American University, University of Illinois at Champaign-Urbana and the Urban Institute. Nationally, confidential responses were collected on electronic tablets by 6,000 trained volunteer data collectors.

The study was funded nationally by The Howard G. Buffett Foundation and locally in part by Kroger.

Click to read the full report for  Hunger in America 2014: Indiana.