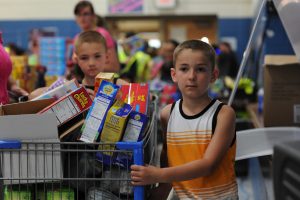 Download First Half of 2015 Food Hardship Rate by State (pdf).

The impact of the economic recovery plus the increased share of households in need that is receiving SNAP (food stamps) is showing positive results, based on evidence from the latest Gallup-Healthways Well-Being Index survey (pdf) that reveals a declining number of families struggling to afford food. The analysis of the Gallup survey was conducted by the Food Research and Action Center (FRAC). Such families are described by FRAC as experiencing food hardship.

For the last seven years the Gallup organization has been asking large numbers of American households “Have there been times in the past 12 months when you did not have enough money to buy food that you or your family needed?” Nationally, 15.8 percent of survey respondents in the first half of 2015 answered “yes.” This is a drop from the 17.1 percent who replied “yes” in 2014.

The trend in the national data was reflected as well in the state-by-state survey findings for the first half of 2015.

Compared to the 2014 annual data, several states saw a statistically significant decline in food hardship in the first half of 2015. These states included Arizona, California, Florida, Illinois, Michigan, New Jersey, New York, North Carolina, Tennessee, Texas, Virginia, and West Virginia. Food hardship rates in the other 33 states with survey findings (several other states did not have adequate sample sizes to report any findings) generally either remained at the same rate as 2014 or, more typically, declined but by an amount that was within the margin of error.

The food hardship rates are the lowest since Gallup began collecting data in 2008. In the first few months of 2008, the food hardship rate was 16.7 percent or lower, but the deepening recession pushed the rate up so much that in most of the five and a half years beginning in July 2008 the monthly rate was 18 percent or higher — reaching as high as 20 percent in some months.

Today, there are many key factors at play that are resulting in fewer Americans struggling to put food on the table. As the economy continues to improve, unemployment numbers continue to fall. Meanwhile, federal nutrition programs buoy this positive trajectory. The Supplemental Nutrition Assistance Program (SNAP, formerly food stamps), for instance, is helping to meet the nutritional needs of people who are out-of-work as well as those who are transitioning to employment and/or to jobs with better wages. Since the recession hit, the growth in the rate of SNAP participation, even as the number of eligible people grew, kept hunger in America from getting even worse.

While progress is being made, it is important to note that the current rate of food hardship is still far too high, and still unacceptable. There are large proportions of children, adults and families in every state who face a daily struggle with hunger.

We are at a critical crossroads in determining how we will assist the most vulnerable among us. This fall, federal child nutrition programs—such as school breakfast, school lunch, afterschool meals and summer meals — are set for reauthorization. Other safety net programs from SNAP to low-income tax credits to Social Security Disability Insurance to Medicaid are under attack in the budget process.

This is the right time for our representatives to demonstrate their commitment to ensuring our nation’s struggling families have the nutrition they need to stay healthy and that children can stay active and perform well in school. As for SNAP, it continues to do its job as the first line of defense against hunger, but the monthly benefits still do not meet the need. If we are to build on the progress made, Congress must protect and strengthen SNAP, the child nutrition programs, and other key elements of the safety net.