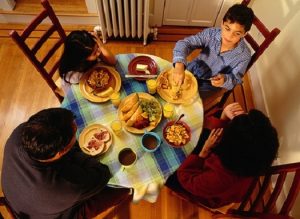 While many of us attend holiday parties that center around food this time of the year, and maybe worry about eating too much – it can be easy to overlook the fact that people around us may not have enough to eat.

One in six Hoosiers doesn’t always know where their next meal will come from. According to Emily Weikert Bryant, executive director of Feeding Indiana’s Hungry, this is a year-round problem, but it’s at the forefront during the holidays.

“We see the holidays as an opportunity to start that conversation with the public and with newly-elected officials, to say, ‘Here’s what’s going on in our communities and here’s who’s in need, and there are people experiencing hunger, and that’s unacceptable,'” she said.

Bryant said everyone can help, either through food or cash donations or by volunteering at a local food pantry.

Now that the election is over, it’s time to let lawmakers know that hunger should be a top priority, she added.

“We’re asking our newly-elected officials, both in Washington, D.C., and in Indianapolis, who will be sworn in in the next few weeks to recommit to our state and to our country that nobody in our nation should go hungry,” she explained.

When it comes to food insecurity, the Food Research and Action Center ranks Indiana 23rd in the nation, with nearly 20 percent of households with children reporting they are unable to afford enough food.