According to Study, 15% of Hoosiers Struggle with Hunger 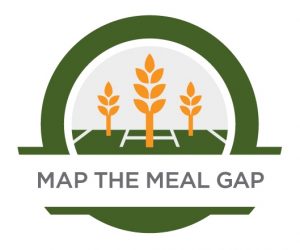 Feeding Indiana’s Hungry announced the release of Map the Meal Gap 2016, an annual study by Feeding America that details food insecurity rates in every county and congressional district in the United States. The study reveals that 15 percent of the population in Indiana is food insecure – 1,009,710 people, including 335,410 children.

Food insecurity is the U.S. Department of Agriculture’s measure of lack of access, at times, to enough food for an active, healthy life for all household members. Using county data from the five-year period of 2010 to 2014, Map the Meal Gap 2016 is the first Map the Meal Gap report with post-Great Recession county food-insecurity estimates.

“Map the Meal Gap shares data about the prevalence of hunger in our community,” said Emily Weikert Bryant, Executive Director at Feeding Indiana’s Hungry. “This information allows our member food banks to better understand the need and work with partners, donors, and stakeholders, to help close that gap.”

This year’s report found that nearly 15 percent or approximately one in seven people in the United States struggles with hunger at some point during the year. While the rate has decreased since 2011, the prevalence of food insecurity across counties remains historically high since 2008, and has not yet returned to pre-Great Recession levels.

“This new research documents the pervasiveness of hunger in every community in our nation. While the economy has improved and unemployment rates have declined, many people are still struggling to access adequate amounts of nutritious food for their families,” said Diana Aviv, CEO of Feeding America.

The study is supported by founding sponsor The Howard G. Buffett Foundation, ConAgra Foods Foundation and Nielsen. The lead researcher is Dr. Craig Gundersen, Professor of Agricultural and Consumer Economics at the University of Illinois, Executive Director of the National Soybean Research Laboratory and a member of Feeding America’s Technical Advisory Group. This is the sixth consecutive year that Feeding America has conducted the Map the Meal Gap study.

A summary of the findings, an interactive map of the United States, and the full report are available at www.feedingamerica.org/mapthegap.

Join the conversation about Map the Meal Gap 2016 on Twitter using #MealGap.