Hunger in Indiana is Not Declining According to New USDA Report 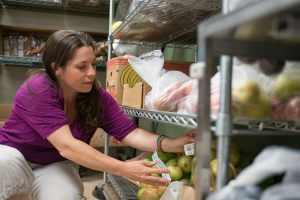 4.1 percent) struggled against hunger over a three year average from 2011-2013, according to a new report released yesterday by the U.S. Department of Agriculture’s (USDA) Economic Research Service. This number was unchanged (in terms of statistical significance) from the previous three year average from 2008-2010, when 13.0 percent were considered to be food insecure. The rate is, however, well above the 9.2 percent from 2005-2007 before the recession.

The very low food security rate – describing households that faced deeper struggles with hunger – was 6.1 percent in the 2011-2013 average, compared to the pre-recession average of 3.6 percent from 2005-2007.

Nationally, more than 17.5 million American households (14.3 percent) struggled with hunger in 2013, where an annual estimate is calculated. The 2013 numbers were unchanged (in terms of statistical significance) from the 2012 rate, when 14.5 percent were considered to be food insecure, but a slight dip from the 2011 rate of 14.9 percent. The rate is, however, far above the 11.1 percent rate in 2007, before the recession.

“Hunger continues to impact Hoosiers and is not declining,” said Emily Weikert Bryant, Executive Director of Feeding Indiana’s Hungry. “The help provided by our member food banks goes far to serve our neighbors who are struggling, but hunger is a problem that simply should not exist in this nation and in our state of agricultural abundance. We have more than enough food to meet the need of every American. But we need to better ensure that people can access a safe and healthy diet to do well in the workplace or at school, improve health and wellbeing, and eliminate the fear and uncertainty of not knowing from where or when the next meal will come.”

“To move the needle on hunger we must boost the cooperation of both the public and private sectors,” said Bryant. “Both are necessary to prevent any Hoosier from going to bed with an empty stomach.”

Other national findings from the USDA report include: