1 in 7 Hoosier Households Struggled with Hunger in 2014

Household Food Security research released today by the USDA Economic Research Service illustrates no significant improvement in reducing food insecurity in Indiana. One in seven Hoosier households struggled with hunger on average in the years 2012-2014. 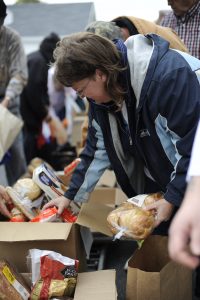 “While the needle seems to be fluctuating, no real improvement is being made to ensure that Hoosier families have enough food to remain healthy and active,” said Emily Weikert Bryant, executive director of Feeding Indiana’s Hungry.

“More than 1 million Hoosiers rely on our emergency food network, which continues to set new records in food distribution, but this will not solve the problem,” said Bryant. “Our nation can solve hunger. The federal nutrition programs are among the most effective tools in ensuring people of all ages get the food they need to be active and healthy.  We’re urging our elected leaders to keep these programs strong, and that starts with a strong Child Nutrition Reauthorization bill this fall.”